Solar heat is far from being a standard in production processes yet, but it is more widespread than you might think: System designers and collector manufacturers report more than 500 systems worldwide. the 2017 World Map of Solar Process Heat Specialists shows 71 companies in 22 countries.
Some three years after the German market research agency solrico produced its first World Map of Solar Process Heat Collector Industry in 2013/14 (see S&WE 3/2014), the organisation conducted a second comprehensive survey of the market. This time, the world map is also part of the Solar Payback project, which aims to raise awareness and improve the economic
and policy conditions for solar process heat in Brazil, Mexico, India and South Africa. The 3-year project is coordinated by the German Solar Industry Association (BSW-Solar) and funded by the International Climate Initiative of the German Federal Environment Ministry. It runs until September of 2019. The world map is also published in a 16-page technology brochure in English, Spanish and Portuguese for distribution at Solar Payback events.
The target group has been changed somewhat since the first world map of the solar process heat collector industry based on a survey conducted in late 2013. The first survey specifically targeted manufacturers of hightemperature collectors up to 250 °C, but this time system planners and engineering offices were also invited to participate. The prerequisite for inclusion in the survey was that they had to offer turnkey process heat plants to their customers. The questionnaire defined turnkey as a plant planned, supplied and installed by the seller or, the
installation of which is monitored by the manufacturer.
Of the approximately 130 companies contacted, 71 provided data and took part in the survey. The questions were similar to those in the first survey in 2013: We wanted to find out how big the global solar process heat market is, how satisfied providers are with the current business climate, and how the situation in different countries and regions differs.

The number of reference plants of all companies listed on the world map were checked for plausibility. Where discrepancies were found, detailed information was requested. This is how we ended up with a total of 389 reference systems providing solar heat for industrial and a few commercial processes, such as car washes. That means that despite the narrow definition, about two times as many plants are on the world map as are recorded in the SHIP database. Of the participating 71 providers, just 29 (41 %) said that they were aware of the SHIP database. Only twelve of these said that they had previously listed projects in the online portal, but some
systems were entered into the database by the SHIP organisers themselves.

A reconciliation of the solrico survey with the SHIP database revealed that some solar process heat providers have projects listed as a reference in the database that are not listed on the world map because they do not fall into the “turnkey” category. If these nine plants are counted as well, the number of systems that the participants of the world map survey have built raises to 398 with a total collector or mirror area of at least 294,531 m². This area presents a bottom threshold, because some system suppliers only delivered the number of plants without collector or mirror area.

The 127 additional installations from the SHIP database were designed by 62  companies that did not participate in the world map survey and which are also not necessarily turnkey suppliers. Among these are 25 plants that cannot be explicitly attributed to any engineering company. It is therefore safe to assume that the solar process heat industry includes far more companies than the 71 turnkey suppliers listed on the world map. 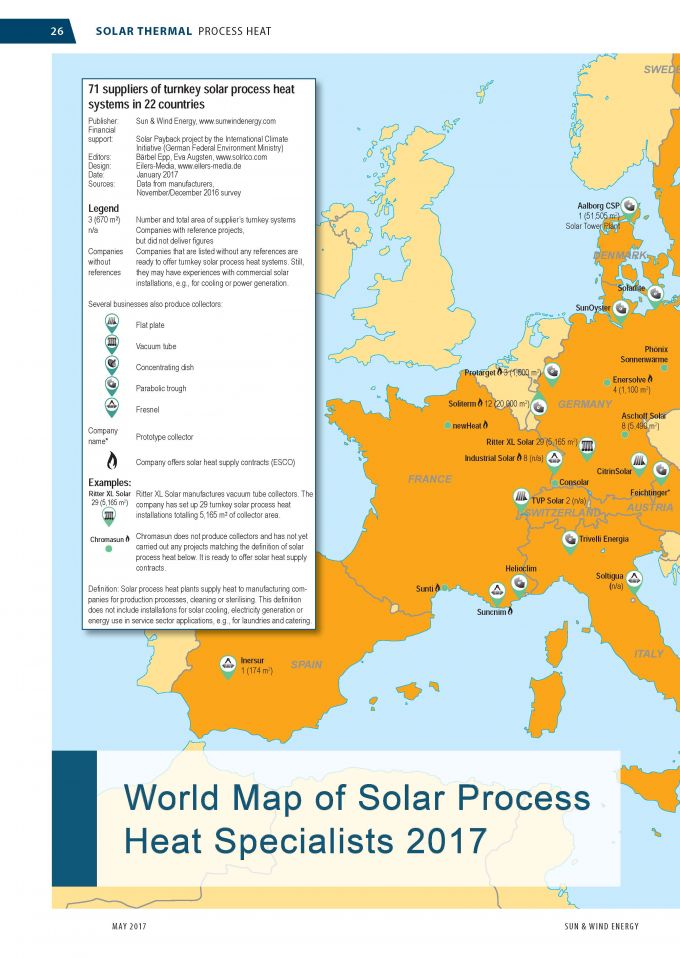 Diverse offers
The services the survey participants offer are also very diverse. More than half of them manufacture their own collectors. Parabolic trough systems, offered by 18 manufacturers, are the most common type of collector, followed by flat plate collectors (ten manufacturers), vacuum tube and Fresnel collectors (each five manufacturers), and dish collectors (four companies). Of the participants, 66 % (47 companies) guaranteed a specific solar yield to their customers. That is one aspect in which providers of process heat systems differ significantly from the suppliers of small systems for private use; after all, commercial industrial customers require performance guarantees (see Fig. 1).

High energy prices and solar regulations strengthen the industry
The single most important criterion for good market development is high fossil fuel prices. That not only follows as a reverse corollary to the fact that low energy prices act as a market obstacle, but also because fully 41 % of the respondents explicitly said so (see Fig. 2). This result also sits well with the fact that the companies in the top market of India, more often than in other countries, cited the good return on investment of comparably inexpensive systems as an argument in their favour.
Nevertheless, policy conditions also play a major role. One in five respondents said that an obligation to use solar process heat was a good basis for positive market development, even more so than financial incentives (18 %).

Another aspect often cited as an obstacle is the lack
of knowledge about solar process heat. Here, the choice of words used in reference to customers ranged from “scepticism” to “lack of awareness” and “ignorance”. But respondents also complained of a lack of knowledge and education on the part of planners. Two explicitly cite poor
performance of existing plants as a market barrier.

Just how important the issue of “awareness” is for the solar process heat market is indicated by the fact that 70 % of companies agreed with the statement that solar heat in many market segments is already competitive, but that customers were not sufficiently aware of the fact.

It is hard to assess the impact of financing difficulties on the market. This also crops up in the question of market barriers quite often. However, it is not always clear from the free-text responses with their bullet-points whether participants are complaining of the banks’ reluctance to
extend credit or an absence of government funding. To the statement, “Difficulties with obtaining financing are one of the main limiting factors” 54 % of the participantsexpressed strong  agreement, a further 23 % tend to agreed, and 23 % disagreed.

The larger target group of the current survey means that not all of the statements in the survey for the latest world map of solar process heat in 2017 are comparable with the survey three years ago. In particular, among the 36 listed collector manufacturers from 2013, eight were manufacturers of dish collectors from India. For this group, in contrast to manufacturers of linear collectors, the textile industry was almost as important as the food industry. In the 2016 survey, there were also eight Indian companies among the 71 firms, but only four of them were manufacturers of dish collectors. It also stands to reason that by including installations with flat plate and vacuum tube collectors in the recent survey, the importance of low-temperature processes has increased.

The figures show that the food and beverage segment is still the most important target industry (see Fig. 3). Commercial and service industries have moved to second place. (This segment was queried for the sake of comparability with 2013, although the plants are not shown on the current world map). The textile industry, however, has slipped slightly and is marked by only 16 % of the participating companies.

Also, with regard to market factors, the key factor – fossil fuel prices – is still in first place, despite the change in methodology. There were some changes in the rankings of other factors: Financial incentives slid slightly, landing in third place, while political regulation moved from fourth to second place (see Fig. 2).

As in 2013, we wanted to know from providers, whether they consider photovoltaics competition with their technology. This is a particularly interesting question because in the retail market, the combination of photovoltaics and solar thermal heat pumps has become even more popular in recent years than it was in 2013. Even solar process heat providers seem to be feeling the competition more keenly. While in 2013, only 13 % agreed with the statement that photovoltaic heat was competition for solar energy, the figure was 32 % in 2016. This development still holds, even discounting the responses of all but the manufacturers in the latest survey. Even among these, 30 % see PV as the competition. fig.2: funding anr ROI models are ky factors for solar process heat. Heat supply contracts can help. But many customers do not base their decisions on the internal rate of return (IRR), but rather on the payback period, a calculation that usually works out to the disadvantage of solar thermal