It’s tempting to view solar thermal heaters as an old, boring tech- nology compared to solar photovoltaics. More photovoltaics are installed worldwide, supplying twice as much energy, with sever- al times more GW installed each year, accelerating more swiftly. Photovoltaics are enjoying adoption at scale in every major econ- omy other than Mexico and Russia, whereas solar thermal has depended more on local conditions, both sunlight and policy incentives.

Traditional solar thermal heaters are pedestrian, reaching high temperature only sporadically in the summer. Instead it has been combinations of solar, wind, green hydrogen, and batteries which have made headlines promising to decarbonize various indus- tries by 2050.

But for Gilbert Farina, VP Sales and Marketing of Swiss startup TVP Solar, it is photovoltaics which are the “old technology”.

A third of global energy demand is industrial, and eighty percent of that is heat. TVP believes its High Vacuum Solar Thermal Flat Plates, which don’t use mirrors, can enter a vast array of markets worldwide – this startup has immense ambition. 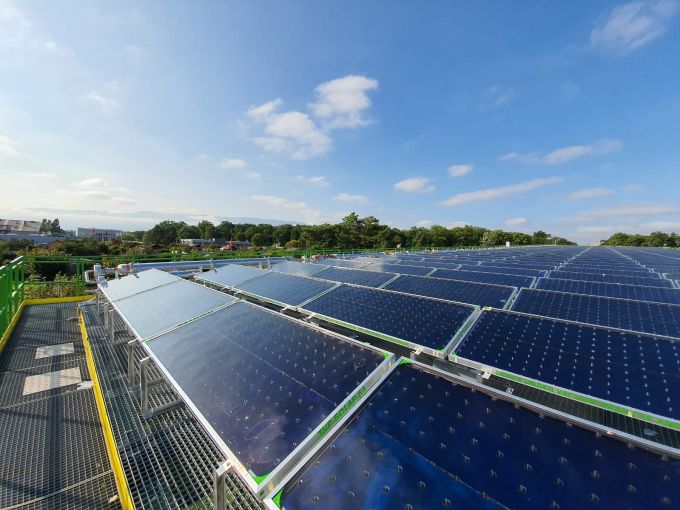 TVP’s solar panels contain a vacuum – the perfect insulation, and transparent. With vastly lower thermal losses, this is a new kind of solar heater, one which can supply up to 200 degrees Celsius – and it has certifications to prove it, from Europe’s ISO Solar Keymark and the USA’s SRCC. That’s unique among solar thermal collectors and is hot enough for a large segment of the world’s industrial processes.

TVP Solar designs solar thermal fields to continuously deliver the client-required temperatures at the same level, in almost any sunlight conditions. Wintertime is of particular interest, with its lower hours of sunlight, where TVP Solar systems can still supply the desired temperature, with algorithmic adjustment to the flow rate according to customer needs. This same approach of modifying the flow rate to maintain temperature has been seen in Vast Solar’s recent concentrated solar power (CSP) power plants in Australia. In contrast, the old type of solar heater will often languish at 20°C or 30°C, only reaching 80°C in ideal summertime conditions.

Some opportunities mentioned by Farina included desalination, refrigeration, cooling – the latter seen in a 2018 Kuwait installation already. “One third of the world needs thermal” says Farina, mentioning cooling systems for offices, space heating, water sanitation, even cooking. District heating is a huge market in the countries which have it –TVP Solar has already installed a solar plant for district heat in its hometown of Geneva, Switzerland, and is in talks with a European utility to introduce district heating to a new neighborhood.

Farina sees his company highly varying its offering according to every market, even between North and South England, Canada to Brazil, and he mentions California as an opportunity for process heat and cooling in the same breath as Kuwait and the Gulf.

“One of the unique value propositions of the company is to deliver the cheapest thermal power possible on earth, to a very large variety of applications at the best possible price.” He continued, “We are not a company that produces a fancy new toy that works eventually but is very expensive. We can use diffused light, we guarantee the vacuum for 20 years, we don’t cost more than other solar heaters, and we have an industrial facility that has been invented and patented to go large-scale.”

Similar to many of the perovskite PV startups which are springing up, TVP Solar is looking at licensing and rapid manufacturing expansion to ramp up very quickly. Its proprietary IP includes components and the manufacturing method of the High Vacuum Flat Plates. Even with a licensing strategy, its current manufacturing capacity is 120,000 square meters, equivalent to about 80 MW thermal. Also comparable to the perovskite startups, TVP Solar claims a 20-fold interest from clients, with looming purchases at 20 times the scale of trials. 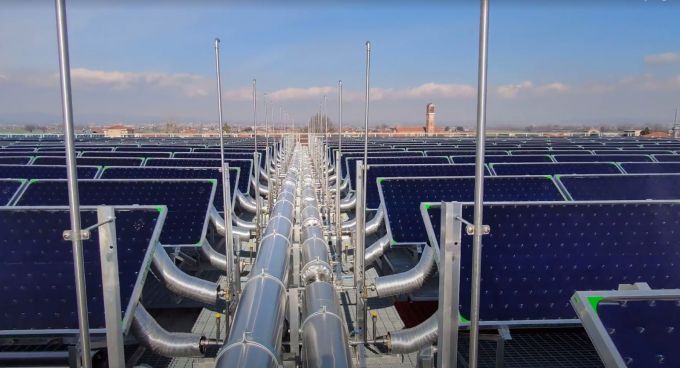 Industrial process thermal energy is the biggest hurdle to reaching net-zero global emissions. Renewable electricity, in the form of the solar-wind-hydrogen-batteries alliance, while dominant in grid power, will require multiple energy transformations to supply heat. Specifically, it will have to first go from solar or wind to electricity, then from electricity to heat: and if energy storage is used in the form of either a battery or green hydrogen, that adds a third step. Each transformation involves an energy loss, as well as its own infrastructure, including potentially trillions of dollars globally on grid transmission upgrades.

With a thermal solar heater, you have just one transformation, from sunlight to heat – and energy storage is simply a bank of hot liquid in an insulated container, no extra process.

Per TVP, its product is three to four times more efficient than silicon PV for heating over 100°C. As such, it will still be more effective for thermal than the thin-film tandem photovoltaics of the 2030 and 2040s. TVP’s panels are 100% recyclable, which is a major contrast to today’s silicon PV, though this advantage will also be eroded by future forms of PV. 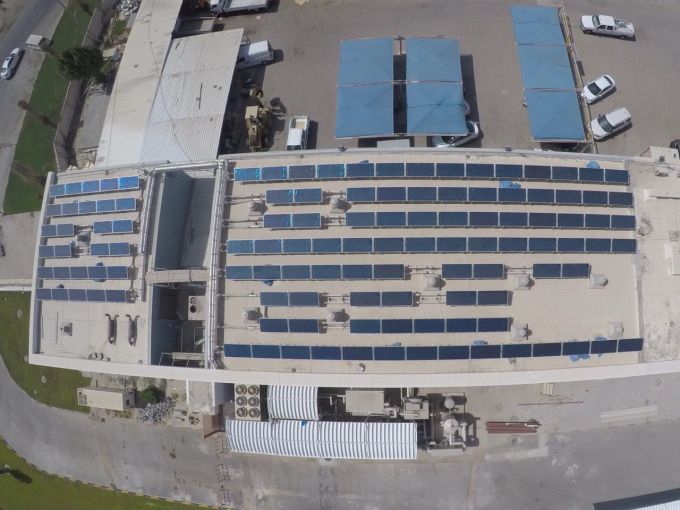 TVP’s solar thermal panels can claim to be more convenient than silicon PV as a rooftop installation in some other ways – slightly heavier than photovoltaics but still able to be carried by workmen, they need less cleaning, have no need for trackers, less need for racking, and is less impacted by shading. In the Kuwait project installed on a building in 2018, even covered in dust the TVP panels were performing at over 85% of nominal without any cleaning effort.

It’s a little misleading to directly compare electrical watts with thermal watts, but 650 thermal Watts per square meter will exceed even the next-gen photovoltaics of the 2040s in power per unit area – a metric which can be the limiting factor of a commercial rooftop installation. TVP’s flat panels use pretty much the whole space, like a solar module, but unlike a traditional tube-based solar heater.

TVP’s patented High Vacuum technology merits further description – it includes an internal “getter pump” system, guaranteed to maintain the vacuum for twenty years. So once the light reaches the TVP panel, it’s in much the same medium it was in as it travelled to Earth from the Sun – a void which doesn’t allow any rogue energy to be dissipated. Only a tenth of solar radiation gets through the atmosphere, so this is roughly comparable to how much the sun would heat you up if you were in outer space, at the Asteroid belt’s distance, with no route for heat to dissipate by conduction.

The vacuum results in a pressure on the panel of ten tons per square meter – TVP has developed a patented internal structure to spread out this pressure and create a working commercial product. Installers have to wear ear defenders just in case they break a panel – while rare, mishandling could result in a very loud bang.

Farina passionately criticizes the habit of rating PV and solar heaters according to their peak power rating – peak power is simply an instantaneous measure, when end-users need consistent energy supply. That supply is what TVP offers their clients, not averages or peaks.

The setup is powerful enough to produce high temperatures anywhere, impacted only mildly by dust or clouds – thanks to the type of irradiation it relies on. Even in a Swiss winter, this technology stays above 80°C, as proven in the recently inaugurated Geneva solar district heating plant. TVP could even produce 160°C in European climes, as it has shown in their installation with Martini & Rossi in Northern Italy. Overall there are thousands of potential customers which can take advantage of solar-driven thermal decarbonization solutions.

Behind all this is the pressure to decarbonize by 2050. The EU’s carbon market in particular is cranking up constantly, forcing industry to decarbonize one way or another.

Rethink Technology Research has established itself over its 17-year history as a thought leader in 5G, and all forms of wireless; the entertainment ecosys-

tem and streaming media; and has now embarked on energy through its new service Rethink Energy.